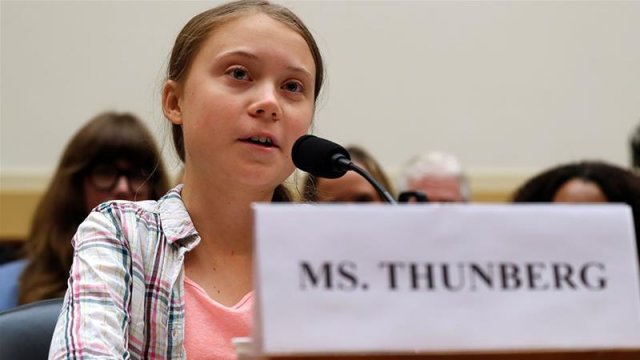 Swedish teenager Greta Thunberg, who has initiated a global movement for climate change, delivered a strong message to members of Congress in the United States, on Wednesday, “Wake up.”

On her six-day visit to Washington, DC, the 16-year-old Thunberg chaired a room full of Democratic politicians and climate change activists, enforcing them to follow scientific warnings and take suitable and strong measures to counter climate change.

“This is not the time and place for dreams. This is the time to wake up,” Thunberg said behind a lowered podium at the ornate House of Representatives Ways and Means Committee room.

Thunberg, pioneer of the “Fridays For Future” weekly school walkouts to urge the government for action on climate change, submitted a 2018 report by the Intergovernmental Panel on Climate Change at the hearing in lieu of testimony. It urged rapid, unprecedented changes to the way people live in order to keep temperatures from rising by 1.5 degrees Celsius by 2030.

“People, in general, don’t seem to be aware of how severe the crisis” is, Thunberg said, asking politicians to “unite behind the science” and take steps, saying that people need to deal with climate change “like the existential crisis it is.”

Thunberg was one of four students invited to a joint hearing of the House Foreign Affairs Subcommittee on Europe, Eurasia, Energy, and the Environment, to provide the fresh generation’s views on climate change.