Who needs original Westerns or capers or body swap comedies or thrillers or crime movies when you can spin them through comic book characters and make big money through products like Logan, Ant-Man, Shazam!, Captain America: The Winter Soldier, and Joker.

The last of these made the point by smashing the all-time box office record for October’s opening weekend. In North America, Joker sold an unprecedented 10.4 million tickets (gross: $93.5 million), beating the previous record-holder, Venom, by about 1.5 million. 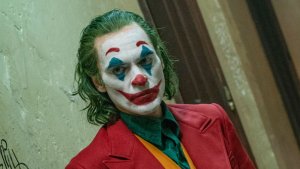 There was also the best opening attendance for Joaquin Phoenix (beating Signs by only around 100,000 people) and Robert De Niro (easily) for the grim crime drama as the tale of supervillain roots. Nevertheless, for The Hangover Part II, it’s about 700,000 seats short of Todd Phillips’ highest.

As for the title character, of movies featuring the Clown Prince of Crime, Joker only placed third. His best is The Dark Knight, in which he’s played by Heath Ledger, with his second-best being Suicide Squad, in which Jared Leto portrays the iconic villain.

There is no correlation for the Joker-focused movies and not really having the Batman character at all (Joker may have a young Bruce Wayne but no Caped Crusader technically).