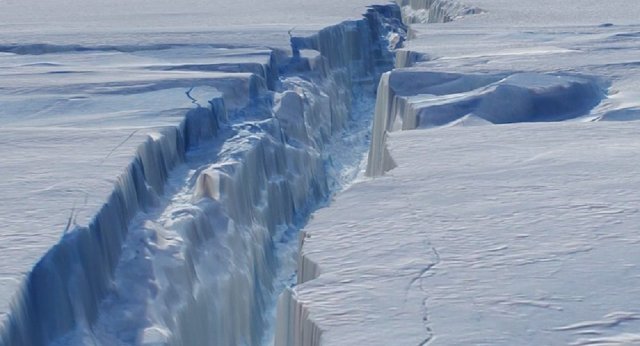 Countdown to Calving of Brunt Ice Shelf has Begun.

Another threat is knocking at the door as two cracks on the Brunt Ice Shelf are creeping closer to each other. When they intersect, an iceberg twice the size of New York City or the size of Houston, Texas will slide into the ocean. This massive chunk could break off from Antarctica’s Brunt Ice shelf essentially at any moment. The Brunt Ice Shelf is a 400 foot-thick sheet of ice in the Weddell Sea.

The crack along the top of the January 23 image, the Halloween crack, first appeared in late October 2016 and continues to grow eastward from a region known as the McDonald Ice Rumples. The rumples are due to the way ice flows over an underwater formation, a place where the bedrock rises high enough to reach into the underside of the ice shelf. This rocky formation prevents the flow of ice and causes pressure waves, crevasses, and rifts to appear at the surface.

The more immediate concern is the crack, Chasm 1 visible in the center of the image. Previously stable for about 35 years, this crack recently started accelerating northward as fast as 4 kilometers per year.

Below is the Stunning drone footage captures Chasm 1, a huge crack on the Brunt Ice Shelf. When it inevitably intersects with the nearby Halloween Crack, an iceberg the size of Houston, Texas will break off into the ocean.

In 2017, The third-largest, trillion ton iceberg broke off Antarctica under the influence of human-caused climate change.

One of the largest icebergs ever witnessed was out of Antarctica. A crack in an Antarctica’s Larsen C ice shelf was responsible for the separation of this massive new iceberg, which is roughly the area of Delaware state and the volume of Lake Michigan.

Researchers found the distinctive rift in Antarctica’s ice in 2010, which has escalated rapidly since 2016. Calving is a normal part of the life cycle of ice shelves, but the recent developments are abnormal. The edge of the Brunt Ice Shelf has evolved slowly since Ernest Shackleton surveyed the coast in 1915, but it has been speeding up in the past several years.