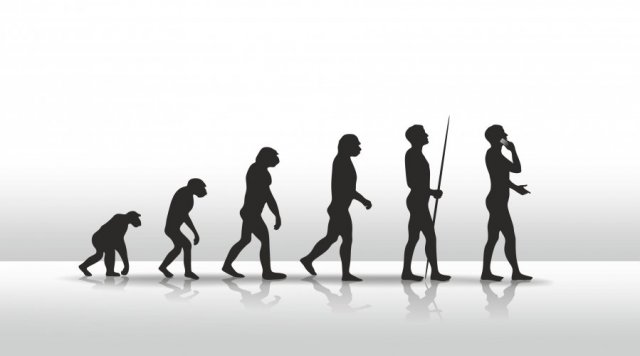 What is meant by Evolution?

Evolution means the changes that occur in a population over time. A word “population” refers to a group of the same species that share the same location and habitat. Evolutionary developments always occur on the genetic level, inside a DNA. In other words, it’s a process that brings changes inherited from generation to generation.

These genetic changes or adaptations occur after genes mutate or combine in different ways during reproduction, help organisms survive, reproduce, raise offspring and thrive. Over the course of time, these changes become common throughout that population, ultimately leading to new species.

Biological evolution explains the phenomenon of how all living beings evolved over billions of years from a single common ancestor. This concept is expressed by the help of the tree of life. Every branch on the tree represents a species. The fork separating one species from another represents the common ancestor that each pair of species shared. So ultimately, every life and all species are interconnected with one another, but any two species may be separated and thrive as a new species after millions or even billions of years of evolution.

Some people regard this evolutionary process as “just a theory.” Evolution is in fact a theory, a scientific theory. In everyday use, the word theory might be a personal guess or a rough idea. But among scientists, the word has an entirely different inside. In science, a theory is an overarching explanation used to describe some aspect of the natural world that is supported by overwhelming evidence but not completely or experimentally proven. It doesn’t mean that its unproven or failed either. people often confuse theory with myths.

Since scientists developed the ability to decode the genome, genetic code. They compared the genetic building blocks of species and surprisingly 98.5% of the genes in people and chimpanzees are identical. This research reveals that chimps are our closest living biological relatives, but it does not mean that humans evolved from chimps. Rather it indicates that humans share a common ancestor with modern African apes including gorillas and chimpanzees, making us very, very close biological cousins. Although we relate to these living primates it doesn’t mean that we got evolve from them.

Date back to our common ancestor with chimpanzees.

Most scientists believe our common ancestor with chimps existed around 5 to 8 million years ago. Then two species made their way apart for separate destinies, one ultimately evolved into wild animals like gorillas and chimps, the other evolved into early humans called hominids, with much better intelligence and thinking capabilities which led us to become modern intelligent being.

The fossil record shows a discrete line of ancestry. Many of the early hominids left no clue ore back propagations for their descendants and result in the form of chain to be prone. Scientists are still unable to find the exact number of hominid species that ever walked on this planet because new fossils are discovered every decade, the story of human evolution becomes clearer all the time that’s why it’s just a theory, keep evolving and separating facts from fiction.

The genus Homo first evolved at least 2.3 million to 2.5 million years ago which differs it from its parent species for having significantly larger brains of about 30 percent larger, but still small as compared to modern human beings.

Species of early Homo, among them Homo habilis, resembled australopiths (early descendant of Gene Homo) in many distinct ways, but they had smaller teeth and jaws, more modern-looking feet, and hands capable of making tools. They probably lived from between 2.5 or 2.3 million and 1.6 million years ago.

The middle Homo species, including Homo erectus, evolved to be more similar to modern humans but their brains were comparatively small (though bigger than australopiths). They probably overlapped with earlier Homospecies, as they developed perhaps between 2 million and 1.8 million years ago.

The final transition, from the middle to late periods, happened about 200,000 years ago. Late Homo species, including Neanderthals and Homo sapiens, evolved with large and complex brains, leading eventually to linguistic development, and developed cultures and traditions as an increasingly important aspect of human life, which later let them divide into tribes, then clans and then countries as we see in the modern era.

Our WORTH compared to the history of Universe and Evolution.