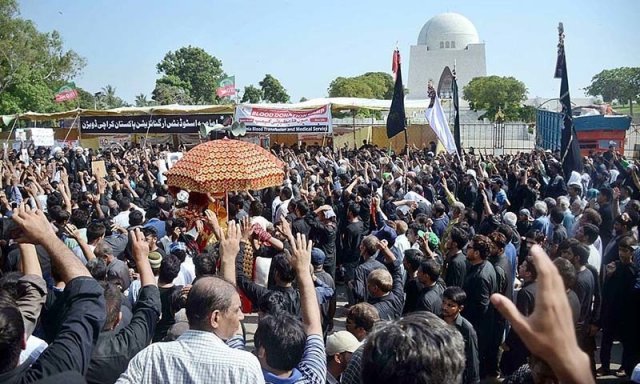 Ashura was observed across the country with dignity on Tuesday to pay homage to the sacrifices rendered by Imam Hussain A.S and other martyrs of Karbala amid strict security to protect mourners from any unexpected incident.

According to Radio Pakistan, processions were carried out in various cities ended peacefully as thousands of security personnel were deployed on the routes of procession and mobile phone services remained partially suspended in sensitive areas across the country.

In Karachi, the main Ashura procession started at Nishtar Park. It passed through Peoples Chowrangi, Saddar dawa Khana and Bolten market and culminated at the Imam Bargah Hussenian Iraniana Kharadar.

Big and small processions were held in various other parts of the city.

Strict security measures were taken on the occasion. There was ban on pillion riding in the city. Cellular services were also partially suspended in some areas of the city. Several lanes connecting to Karachi’s main MA Jinnah Road had been sealed with shipping containers

Over 8,000 police officials were deployed in the city. The special security unit of Lahore police, the Anti-Riot Force, the Dolphin Squad and the Police Response Unit were also on duty.

Additionally, barbed wires and barriers were placed on roads leading to the main procession. Snipers had positioned on roofs of buildings on the procession route..

Mobile services had also been suspended in areas where the procession was passing through.

According to Radio Pakistan, the central procession of Ashura in Rawalpindi emerged from Imambargah Colonel Maqbool Hussain, which culminated at Imambargah Qadeemi after passing through its designated route.

Metro bus services had also been suspended in the city.

In Peshawar, multiple Ashura processions were taken out and concluded after passing through the traditional routes. However, the main Alam and Zuljinah procession of 10th Muharram emerged from Imambargah Agha Syed Ali Shah Qissa Khawani Bazaar this morning which concluded after reaching its final destination.