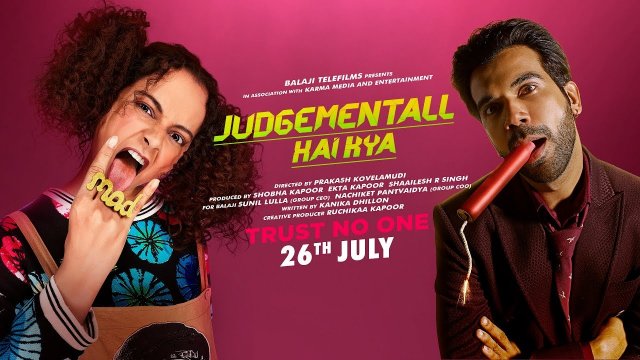 For the upcoming movie “Judgemental Hai Kya”, the two most versatile actors in the Bollywood industry are cast opposite each other. It is produced by Ekta Kapoor, who is an established performer in terms of production.

This film finds its place in the genre of comedy-thriller. The film was earlier called “Mental hai kya,” but it was later renamed due to the protest of some human right activists.

Although the image is of the genre of comedy, it still succeeded in giving a powerful social message. This film has dealt with the area that the Bollywood makers don’t often touch.

In her adult years, the character “Bobby” played by Kangana Ranaut is suffering from acute psychosis. She earns her living working as a film dubbing artist, where she’s the voice of the female lead characters. But for her slender mind, it’s too much, she began to get greatly affected by the characters she dubs for and imagines herself in place of the character. It follows her therapy that is set to give a comedy tinge.

Bobby Keshav and Rima’s new tenants (Rajkummar Rao and Amyra Dastur) are a married couple. And the time arrives for murder in the story, and Bobby thinks that Keshav is behind it. Is it her over-obsessed nature to imagine characters in films that made her think that way. Of course, there’s a criminal between the two. The director succeeded in linking the story to the epic Ramayana somehow.

In her role, Kangana is phenomenal, she has totally nailed it, she’s adjusted so well to the character that it seems to be her original character. Raj Kumar Rao also succeeded in giving justice to his role. People had high expectations from him based on his prior track record, and he definitely lived up to those expectations. He dwelt completely in his uncanny character.