Actor Naheed Shabbir, known for her role in several television dramas, is getting married.

Her mehndi-mayoon was attended by a number of celebrities. 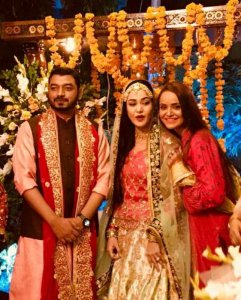 Born in 1984, Shabbir began coming on TV from a very young age. She gained fame for her first drama Aik Naye Morr.