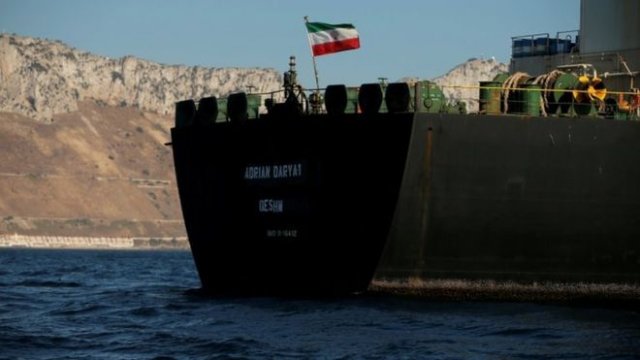 The United States has confirmed Britain’s claim that Iran delivered oil from the US sanctioned vessel to Syria in breach of the US and EU sanctions that restrict Iran from making such trades.

Speaking to media at Thursday’s State Department press briefing, spokeswoman Morgan Ortagus said Iran “delivered oil to Syria and that fuel goes straight into the tanks of troops that are slaughtering innocent Syrians.”

In a tweet posted Wednesday, Iranian Ambassador to Britain Hamid Baeidinejad said the Iranian-owned vessel, Adrian Darya 1 had sold its oil at Mediterranean sea to an anonymous private firm “despite various American threats.”

Adrian Darya 1 is an escaped Iranian vessel which was earlier seized by the British officials in Gibraltar, believed to have been carrying oil to Syria, which is, according to authorities is a violation of European Union sanctions on Syria.

After 6 weeks of detention, the Gibraltar court decided to release the tanker after Iran’s written guarantee that the Grace 1 (now named as Adrian Darya 1) would not be sailing to countries on the European Union sanctions list, after departing from the port.

Washington had attempted to extend the detention period of Grace 1, making a last-minute call, on the basis of having its links to Iran’s Islamic Revolutionary Guard Corps (IRGC), which it has declared a terrorist organization.

Iranian officials denied providing such assurances and the Adrian Darya 1 sailed toward the Syrian coast before turning off its tracker on 2 September.

In his tweet, Baeidinejad said Iran believes EU sanctions “cannot be extended to third countries.” He posted his comments after being ordered a day earlier by British Foreign Minister Dominic Raab, who put forward a statement condemning Iran for “breaching assurances” about the Oil vessel. Raab said it was “clear that the oil has been transferred to Syria and Assad’s murderous regime.”

Ortagus, in her Thursday statements, said it is important for the international community to take notice of that “once again you have been lied to and misled by the Iranian regime.”