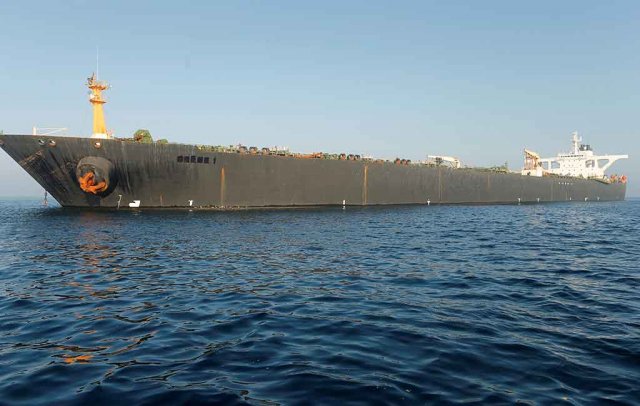 TankerTrackers.com is of the few companies monitoring global oil shipments, disputed the claim by US and British officials that Iran delivered oil from the US sanctioned vessel to Syria in breach of the US and EU sanctions.

The tracker company tweeted that satellite images showed the Adrian Darya 1 remained anchored off the Syrian port of Tartous Wednesday with all of its oil still on board.

Long story, short: The #AdrianDarya1 sailed into Syrian waters, anchored off the coast of Tartous and is just parked there, still holding 2.1 million barrels of Iranian oil she picked up FIVE MONTHS AGO. Both Baniyas and Tartous accept maximum 16m vessel depth. She‘s 22m deep. https://t.co/4wwOByTgHI

“The reported monetary transaction has no relevance because a buyer has not shown up and won’t do so, as the whole world is watching this now,” Samir Madani, the co-founder of TankerTrackers.com told media. “It’s all talk until the oil actually has been discharged from that vessel,” he added.

U.S. officials repeatedly have warned the international shipping industry that Washington will aggressively impose US’ secondary sanctions against anyone doing trade with sanctioned Iranian shippers, carriers and companies.

Reid I’Anson, a Houston-based global energy economist for French intelligence company Kpler, said Iran might have been offloaded at least some of the oil from Adrian Darya 1.

“We assume the tanker discharged oil after it went dark (by turning off its transponder) because a ship costs money to keep floating and it’s not going to sit there for a week and do nothing,” I’Anson said in a Wednesday interview with US Persian broadcaster. “It could have transferred oil at a port or done a partial ship-to-ship (STS) transfer anytime after Sept. 2 with a component vessel that also could have turned off its transponder,” he added.

I’Anson also made the speculation that Iranian vessel may have transferred oil to other tankers bound for Turkey or Syria, with both nations having been Iran’s only major oil customers in the region.

In the days before turning off its tracker, the Adrian Darya 1 had considered the Turkish ports of Mersin and Iskenderun as its probable destinations, according to data gathered by ship tracking and maritime intelligence company MarineTraffic.

Madani said he doubted Turkey would have sent a tanker to transfer oil from the Iranian tanker.

“Turkey’s refineries are petrified of touching Iranian oil. They deal in U.S. dollars,” he said.

Relevant: The US confirms Britain’s claim of Adrian Darya delivered oil to Syria