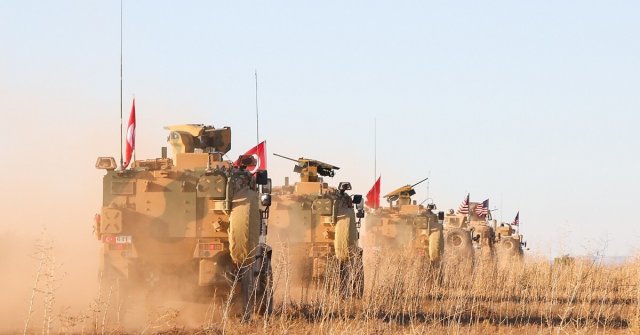 Turkish military vehicles have trespassed into northeast Syria for joint patrols with the United States Army as part of a US promised so-called “safe zone” along the northern Syrian border.

The joint ground patrols were launched as part of the first phase of the “safe zone” plan agreed between the two countries last month, which was kept delaying by the US, amid pressure and rage from Ankara.

The news agency said that two helicopters overflew the area as the Turkish vehicles move through an opening in the concrete wall stretched between the two countries.

The Turkish Defence Ministry confirmed the start of the joint military patrols and said unmanned aerial vehicles were also being deployed.

The US-Turkey deal for the establishment of a safe zone committed earlier this month to deescalate tensions between Turkey and US-backed Kurdish-led forces over the Syrian border in war-torn Syria that Ankara perceives as a terrorist offshoot of the PKK.

On Aug. 7, Turkish and U.S. military officials agreed to set up a safe zone and develop a peace corridor starting from the Euphrates River to the Iraqi border to facilitate the homecoming of displaced Syrians currently living in Turkey to their country and facilitate security for Turkish border settlements and military outposts.

Turkish President Recep Tayyip Erdogan has repeatedly said that Turkey will unilaterally start its own operation to develop a “safe zone” in northern Syria if talks with the United States fail to let Turkish troops control the area “within a few weeks”.

Relevant: Turkey to begin operation if promised “safe zone” is further delayed by the US

The Kurdish administration in northeast Syria said late August that the Kurdish People’s Protection Units (YPG) was expelling forces and heavy weapons from the rural areas of the region to act in accordance with the plan.

The Syrian government condemned the recent developments “in the strongest terms”, declaring it a violation of international law.

“This step is an aggression in the full sense of the word and aims to complicate and prolong the crisis in Syria,” a Syrian official was quoted as saying by the Syrian news agency.