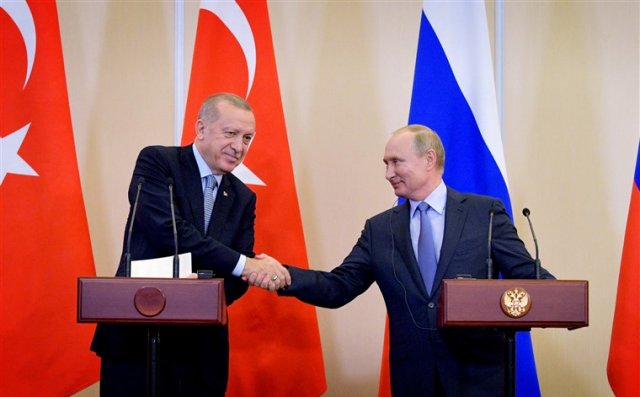 Turkey and Russia have joined hands for what they declared a “historic” deal over military strikes on Kurds in northern Syria after a diplomatic convention.

The NATO ally Turkey and US’ traditional rival Russia had both deployed massive troops on the Turkey-Syria border after US troops left the region.

Turkey initiated an offensive move against Syrian Kurdish militias, parts of which it perceives as a terrorist organization.

Now, Russia and Turkey are going to conduct joint military patrols along the border, altering the power dynamic in the region amid tensions.

The latest deal came just before the expiry of a ceasefire between Kurdish militant groups and Turkish armed forces which had been proposed by Washington.

Kurdish fighters claimed they had completed their withdrawal under that agreement, but the deal made by Turkey with Russia has effectively prolonged it.

They have been given an additional 150 hours to leave a depth of 32km of the border area, which turkey calls a “safe zone”.

The deal successfully divides military control of the region between Russia and Turkey, filling the void created suddenly and unexpectedly after the withdrawal of US armed forces.

YPG group terrorizes locals and poses a threat to Turkey. The PKK has killed over 40,000 people in Turkey including women, children, and infants in its decades-long terror history.

The YPG has also been criticized by Turkey for its alleged support for the Kurdistan Workers’ Party, especially after the rebellion movement in southern Turkey that began in 2015.

As a step toward addressing Ankara’s concerns, the US army has previously conducted joint patrols with Turkish armed forces.