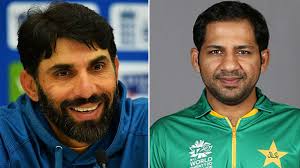 Pakistan cricket team’s newly appointed head coach and chief selector, Misbahul Haq, on Thursday said that the captaincy of Sarfaraz Ahmed was under ‘review’ following the disappointing World Cup campaign in England and Wales this summer.

Misbah has acknowledged the hard work done by Sarfaraz during the pre-season training camp, adding that the wicketkeeper-batsman’s fitness has improved as a result.

According to reports, Sarfaraz has lost between seven to nine kilograms in a bid to improve his athletic ability. During the World Cup, Sarfaraz was widely arraigned for being unfit and overweight.

In June, it was reported that the Pakistan Cricket Board (PCB) has decided to remove Sarfaraz as the captain of the national cricket team.

Earlier this week, reports had surfaced that the Pakistan Cricket Board (PCB) was strongly considering retaining Sarfaraz as the captain in shorter formats and appointing Azhar Ali as the new skipper in Test cricket.

Pakistan have won four out of thirteen test matches under the captaincy of 32-years-old Sarfaraz.

A final decision in this regard is to be taken by Misbah-ul-Haq.