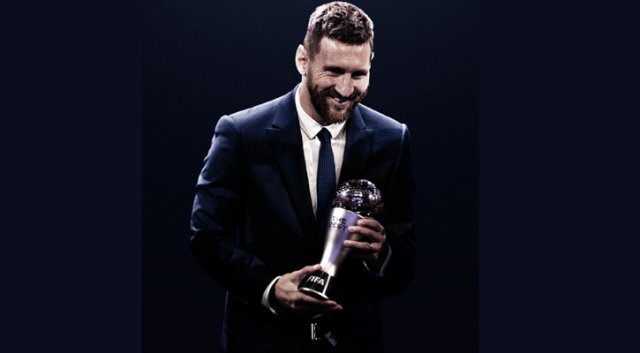 The award was handed to the Barcelona and Argentina captain at a ceremony in Milan, Italy.

Barcelona striker Messi’s victory was a surprise as he edged out Virgil Van Dijk, a centre back who transformed Liverpool’s defence on the way to the Champions League crown, having won the European best player award last month.

“I want to thank those who decided to give me this recognition,” said Messi.

“The most important thing for me is the collective awards, but today is also a very special night for me.”

However, this is Messi’s first The Best award, having gone without a top personal honour since 2015.

In 2016, FIFA introduced The Best award.  Ronaldo won this award for 2016 and 2017. However, Croatia and Real Madrid midfielder Luka Modric made a clean sweep as won the award last year.

Ronaldo had also been shortlisted for the award this year, but did not attend the ceremony as he was named in FIFA’s World 11 best team along with Messi.

Additionally, Debrecen forward Daniel Zsori won the Puskas Award for his overhead kick against Ferencvaros during a Hungarian league match.

Additionally, Netherlands goalkeeper Sari van Veenendaal was voted women’s goalkeeper of the year after helping her country to the final of the competition.

Leeds manager Marcelo Bielsa was given the fair play award.