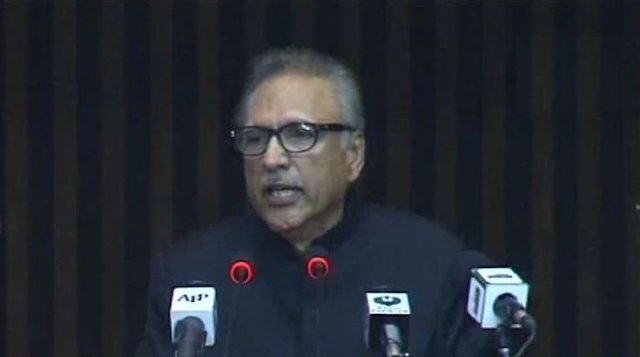 President Arif Alvi addressed a joint sitting of parliament at the beginning of the second parliamentary year of National Assembly under the Pakistan Tehreek-e-Insaf (PTI) government in Islamabad on Thursday.

The session started off with the National Anthem followed by the recitation of the Holy Quran and Na’at.

The session was attended by Prime Minister Imran Khan, the chiefs of the navy and air force, and chairman of the Joint Chiefs of Staff Committee, speakers of provincial assemblies and a number of foreign diplomats.

As soon as President Alvi started his speech, anti-government chants began to raise from the opposition members including the slogan “Go Niazi Go”.

Alvi started his address by congratulating the lower house of parliament on completing its first year under the PTI government.

Referring to India’s abrogation of occupied Kashmir’s special autonomy, he said: “India has violated its own constitution as well as the Simla Agreement with its illegal actions [in occupied Kashmir].

He said the government also reduced diplomatic ties with New Delhi and raised the issue at all international fora.

“It is a huge accomplishment for the government that the UNSC held a session on the issue after more than 50 years, despite India trying its best to prevent that from happening”, he added.

Expressing gratitude, he said: “I thank the friendly countries that understood the seriousness of the Kashmir issue and supported Pakistan’s stance, especially China, and played their role in successfully holding UNSC meeting.”

“Pakistan is with its Kashmiri brethren. We will continue to extend moral support; we were, we are and will always be with the Kashmiris.”

“India’s illegal actions have threatened peace in the region. We have always answered India’s aggression with responsibility in a bid to ease down the already volatile situation.”

He then went on to highlight the one-year performance of the PTI government.

“The government has had to take difficult decisions in the 2019-20 budget because of the problems faced by the country,” he said, adding that FBR needs more resources and taxpayers should be facilitated.

He said the primary purpose of the government is to make Pakistan a welfare state.

“No country can progress without the development of the education sector,” he said.

Pakistan’s youth population is one of the highest in Asia, he said, adding that the future of the country is in their hands.