Secretary Nazar Shahani of the Regional Transport Authority (RTA) said that the agency has approved 14 new routes on which the buses would operate.

The routes were finalized in a meeting that took place at the Commissioner House in Karachi. The commissioners, RTA representatives, traffic bureau and traffic police attended it. 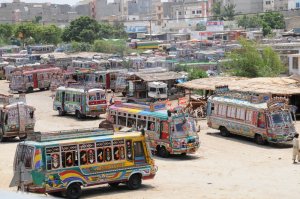 Shahani said the provincial government planned in phases to take the public buses out onto the roads. So by the end of this year, a fleet of 20 to 25 buses will be operational in the first stage.

Fares have yet to be decided on for the buses, he said. It will soon be finalized by the Sindh government and service provider, Shahani said, adding that it would be the responsibility of the Daewoo Pakistan Express Bus Service Limited to repair and maintain buses.

In April last year, the Sindh government launched the People’s Bus Service in Karachi with a fleet of only 10 busses plying along Quaidabad and Tower. With the passage of time, however, those buses were reduced.