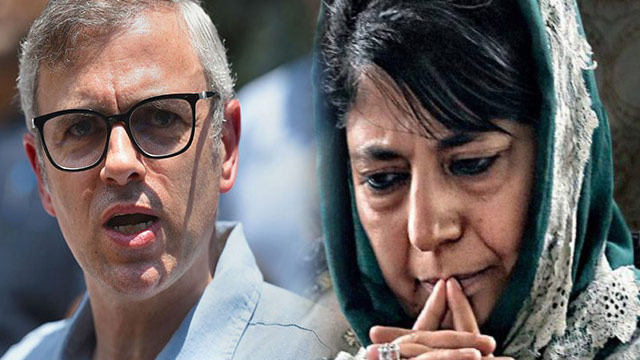 Can events shown in a movie San Andreas really happen as California experiences repeated cycles of quakes and aftershocks?

San Andreas is a summer blockbuster disaster film directed by Brad Peyton. Its plot centers around an earthquake caused by the San Andreas Fault that destroys Los Angeles and the San Francisco Bay Area. But, just because we can show cities crumbling from massive earthquakes in a movie doesn’t mean things will actually happen the same way in reality. Many people start believing that what they saw in the San Andreas movie is true and likely to occur somehow in reality, and some people even left the theatre, heading to the store to get their stuff ready for the post-apocalyptic situation in case of an earthquake. Questions started rising again after the July earthquake along the San Andreas Fault that shook California followed by 5000+ aftershocks till now and left massive fissures which can be seen even from the satellites. However, before someone starts to panic, let’s question the storyline and filter the facts from the fiction.

Could an earthquake along the San Andreas Fault cause such an enormous Tsunami as shown in a movie?

According to U.S. Geological Survey seismologist Dr. Lucy Jones, due to the fact that the San Andreas Fault is mostly on land, it will never cause such a large tsunami. Also, tsunamis caused by earthquakes are created at subduction zones, cracked boundaries where two tectonic plates collide and one plate is pushed under another, causing the sea floor to deform which give rise to a Tsunami. There hasn’t been an active subduction zone under San Francisco or Los Angeles. Secondly, the San Andreas Fault is vertical, so even if it goes underwater someday, it wouldn’t cause the ocean floor to tremble that much, which is a reason for such an enormous tsunami as shown in a movie.

Seismologist Lucy Jones says that a large tsunami is 50 feet high. It is nowhere near the height of the tsunami in the movie, which water downed the Golden Gate Bridge, standing around 270 feet above the water. “They can’t be bigger than the ocean is deep,” says Jones. The surfing style waves caused by the tsunami as shown in the movie also doesn’t happen. Tsunamis are rising walls of water, not cresting waves

Could the San Andreas Fault open up to create the fissures as shown in the movie?

Seismologist Lucy Jones states in her article on the movie, “the gaping chasm we see rupturing the San Andreas in central California belongs to the realm of the completely impossible.” If the San Andreas Fault would open up to that much extent as shown in the movie, there must be no friction, and it is friction that causes an earthquake.

Is the degree of destruction as shown in the movie possible?

New buildings are designed to be able to withstand large scale quakes, at least for enough time that people would be able to escape. There would possibly a heavy degree of a damage, but there would almost certainly be enough time to get out before they might collapse “You’re going to have pockets of destruction, pockets of collapse and casualties,” says former Earthquake Engineering Research Institute president Farzad Naeim, “but it’s not going to be Armageddon. The toppling of buildings is very rare,” he added.

What’s the closest to reality part in the San Andreas movie?

According to seismologist Lucy Jones, the only accurate part of the movie is the portraying of the emotions, with better prepared and more knowledgeable characters reacting in a more collected manner, heightening their survival chances.