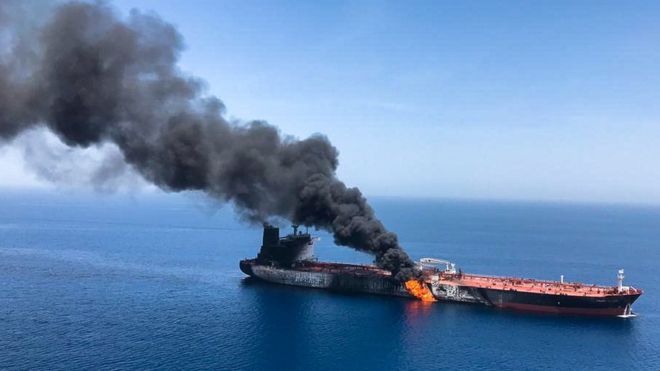 US hold Iran responsible for the Gulf Attack

An escalation in Turkish military deployments near the Turkish-Syrian border has raised fears of an immense conflict. An enormous stationing of heavy weapons is continuing near the strategic northern border town of Tal Abyad, controlled by the Syrian Kurdish YPG militia.

The Turkish intervention in Syria might be connected with the risk of upcoming US sanctions through the Countering America’s Adversaries Through Sanctions Act (CAATSA) over the purchase of Russian S-400 Air Defense Missile system.

A US delegation is yet to arrive Ankara next week, and military deployments by Turkey in Syria are expected to be a part of its agenda.

Dr. Sinan Hatahet, a Syrian analyst based in Istanbul, believes that conflict is unlikely because there are ongoing settlements about the safe zone in northern Syria.

“Both countries are still resolved to solve their bilateral issues through diplomatic channels. But if the US imposes sanctions, it could harm this long-dated relationship,” Hatahet said.

The Turkish military has started military deployments several times in the past to increase pressure on the US to realize its agreement in Northern Syria.

“The only unique aspect of this deployment is that it is happening just after the delivery of S-400 components. The American priority in Syria is to advance negotiations for a political solution and to challenge Iranian expansion,” Hatahet said.

Mehmet Emin Cengiz, a research assistant at the Al Sharq Forum in Istanbul, said even though Ankara constantly emphasizes its willingness to find a workable solution in northern Syria, US sanction threats could lead Turkey to consider new options.

“Turkey has been losing its patience with the US in recent years. The Manbij issue has been problematic between the two sides for a long time. The shared plan for the city was not implemented for more than a year,” he added.

“The nature and scale of the planned safe zone in Northern Syria is still an issue between the two sides. The US seems to be clear in its decision to back the YPG in the future,” Cengiz added.

In addition to CAATSA sanctions, Turkey would likely face serious retaliation from Brussels for its gas drilling activities in Cypriot waters, the European Union is also threatening to cut pre-accession funding to Turkey by €145.8 million ($164.6 million).