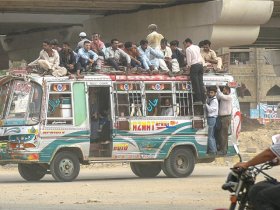 Public Transport will resume in Sindh after Eid holidays

In view of the protest erupted against the policies of the government stated as ‘anti-business”, chairman of Federal Board of Revenue – Shabbar Zaidi has claimed that the revenue board will not compromise on the condition of the CNIC numbers (Computerized National Identity Card) for transactions above 5 million rupees.

“The government would not back out from two issues of CNIC condition and withdrawal of zero-rating facility for five-export oriented sectors that are agitated by traders and industrialists. The traders’ bodies have political affiliations but I do not see any political hand behind the agitation called by them. There is no central leadership of traders, which is hampering effective negotiations with them,”, he said.

Zaidi had explained earlier as well that the reasoning behind the strike is not justified and regarded the criticism against the said policy as planned propaganda. He said that the revenue board is minimizing human involvements and making the system automated to facilitate the taxpayers, he further added that new FBR will improve the past mistakes and will also take due action against the personnel involved in the harassment.

He also shared astonishing figures where only 47,000 persons are registered under sales tax, whereas the number of industrial electricity connections is 341,000. Zaidi identified major sectors where tax leakage is damaging the economy just because of the non-documentation. The actual volume of the sugar sector is over 73% understated for tax purpose. The gas sector is understated by 28%, Beverage sector by 54.5%, Automobile sector by 71%, Ghee sector by 77%, Fertilizer sector by 79% and lists goes on.

The general practice in the market is to avoid documentation to gain personal advantages by earning undue profits. The above numbers are also evidence of the fact that in general major chunk of the economy is unregistered. The bureau aims to increase the tax net by exercising the said measure to pin down the scale of the economy.