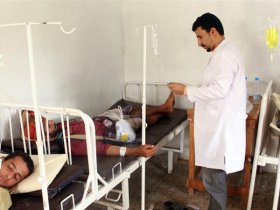 Peter Virdee, owner of London based B&S Property recently announced to place funds worth 500 million pounds for the facilitation of Gurdwaras in Pakistan. The funds would be provided to the trust, which is yet to be formed under the name of Guru Nanak.

The announcement was made by Virdee in a joint press conference with Chairman of Pakistan Tourism Board, Zulfi Bukhari and Special Assistant to the Prime Minister. The press conference was arranged after the meeting of the Central Gurdwara Khalsa Jatha in London for the planning of the trust. The trust would be funded by Sikh Jathas all over the world.

On the occasion, Virdee Said, “I feel humbled and blessed to have a chance for this sewa. The plans are in motion and a delegation will be meeting the Indian and Pakistani governments in the coming weeks and months to take this plan forward,”

The Chief Guest, Zulfi Bukhari shared his gratitude to the Sikh community and assured them that the government would take due steps to facilitate the religious tourists. He added that “We really want the Sikh community in the world to contribute. This is a very special year, the 550th birth anniversary of Guru Nanak Sahib and as Pakistanis, we want to celebrate it in an elaborate fashion. We don’t just want it to be a national event but we want it to be covered globally. I want you to be on board to organize seminars, exhibitions, and conferences around it to build up the hype that this occasion deserves.”

Last year, Prime Minister Imran Khan initiated dialogues with India to proceed with the Kartarpur Corridor Project. His efforts ultimately came true and the project has been started. Renowned Celebrity and former Indian Cricketer, Navjot Singh Sidhu also visited Pakistan on special invitation by the PM on the inauguration ceremony of the corridor held in November 2018. Two India State Ministers also visited Pakistan to witness the historic ceremony. The initiate was much appreciated by the Sikh community all over the world.

In the latest budget, the government has allocated Rs.1000 million for the development of Kartarput project. The allocated funds would be used for the acquisition of land and development of infrastructure. on completion, the corridor would connect Gurdwara Darbar Sahib in Narowal, Pakistan with Dera Baba Nanak in Gurdaspur, India.