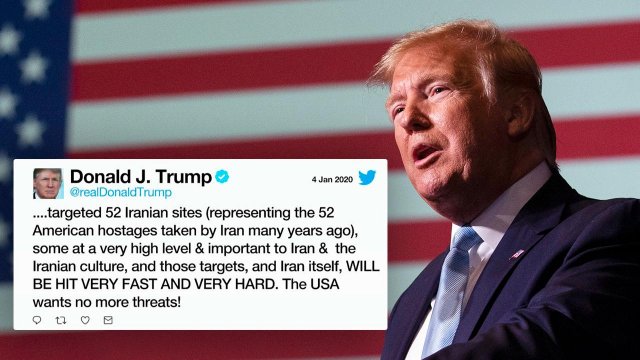 The hashtag #IranianCulturalSites was trending on Twitter, and people have rushed to social media with photos of their favorite historic landmarks and monuments after when the US President Donald Trump suggested that the United States could target Iranian cultural sites, triggering alarm in Iran, with Human Rights Watch (HRW) saying such action would be a war crime.

Amid rising tensions between Tehran and Washington following a US airstrike that killed Iranian military commander Qasem Soleimani last week, Trump tweeted on January 4 that the US had induced sites “important to Iran & Iranian culture” in its hit list of 52 targets for the attack if Tehran retaliates against Soleimani’s killing.

….targeted 52 Iranian sites (representing the 52 American hostages taken by Iran many years ago), some at a very high level & important to Iran & the Iranian culture, and those targets, and Iran itself, WILL BE HIT VERY FAST AND VERY HARD. The USA wants no more threats!

In a statement, HRW said that the laws of war “prohibit deliberate attacks on civilian objects not being used for military purposes.”

The New York-based human rights watchdog quoted Article 53 of Protocol-I to the Geneva Conventions as specifically refraining any acts of hostility against cultural assets.

“The U.S. Law of War Manual (2016), which has extensive provisions relating to the protection of cultural property, incorporates this provision into U.S. law,” it mentioned.

Andrea Prasow, acting Washington director at HRW, urged Trump to “publicly reverse his threats against Iran’s cultural property and make clear that he will not authorize nor order war crimes.”

The U.S. Defense Department should also “publicly reaffirm its commitment to abide by the laws of war and comply only with lawful military orders,” Prasow added.