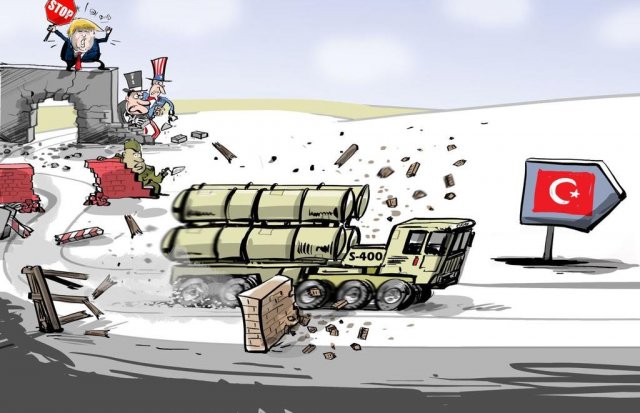 U.S. Treasury Secretary Steven Mnuchin hinted on Monday that the US government was considering to impose sanctions on Turkey for its move to purchase Russian Air Defense system, S-400 air, but no final decisions have been taken yet.

“We’re looking at that, I’m not going to make any comments on any specific decisions, but we are looking at it,” Mnuchin said during a media briefing outside the White House when questioned if the Treasury was considering such sanctions. He did not specify any potential targets.

Opposing the procurement of the Russian system by Turkey, Washington said the sale threatened the future of Washington-Ankara relations and raises questions about Turkey’s relation with the NATO as Russia is trying to cast its own influence on the NATO member country to shake the alliance.

According to US defense officials, the Russian military could use an S-400 deployed in Turkey to collect sensitive data about the F-35 stealth aircraft, which is supposed to become the backbone of future aerial operations by Nato member states.

Turkey disputes this, claiming that it will respect and protect the security of the F-35 by ensuring that the new S-400 system is not linked up to Turkey’s wider, Nato-Integrated Defence Architecture. The US remains unsatisfied with this proposal.

Washington has previously warned Turkey that it will face sanctions over the purchase and removed the country from its F-35 stealth fighter program, but Ankara has so far dismissed the warnings. Ankara received a second regimental set of S-400s last month.

The dispute over the air defense missile system is one of several issues exacerbating the Washington-Ankara relations, that also include the ongoing conflict in Syria regarding Safe Zone development.

Read More: Turkish Military joins the US Army for patrolling in Northern Syria