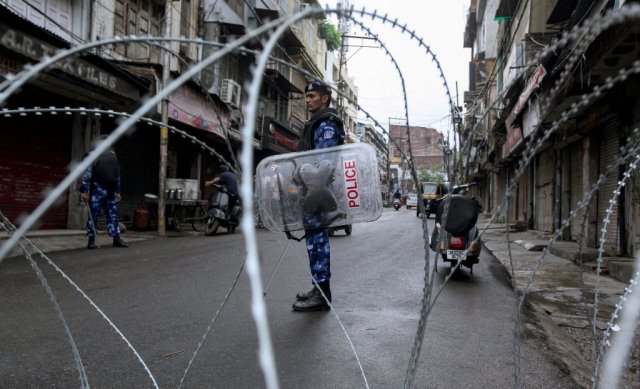 Indian-administered Kashmir has been placed under lockdown and strict curfew, following calls for residents to march in masses against the BJP-led Government’s move to revoke the territory’s special status of autonomy.

Posters with Azaadi slogans were put up overnight this week urging people to defy a ban on public gatherings and join a march in Srinagar after Friday prayers. It is the first massive protest call to be made by separatist leaders of Kashmir since Delhi abolished the Kashmir’s status of autonomy almost three weeks ago.

The roads leading to the office of the UN Military Observer Group, where protesters were instructed to march, were sealed off on Friday morning, with containers, rolls of concertina wire and armored vehicles deployed in the middle of the road.

In the past practice, protests have frequently broken out after Friday prayers. A couple of weeks ago at least 10,000 people appeared in the streets after restrictions were eased to allow residents to attend mosques. BBC footage revealed the true face of Indian security forces, firing and using teargas to divert crowd.

Despite the heavy curfew and massive deployments of troops in disputed territory, enormous protests have continued over the past couple of weeks. At least 152 people have been injured by teargas and pellets, according to sources and hospital data.

The Modi-driven government, which has not yet provided any figures of the injured in the protest spread outs, has claimed there have been no deaths during the on-going crisis.

Millions of people in Kashmir are facing a communications blackout with no access to phone or internet services, from the last three weeks. Most Kashmiri leaders are put under house arrest and allegedly detained. Thousands of other people including lawyers, businessmen, and Kashmiri politicians have also reportedly been detained by the coward Indian Army.