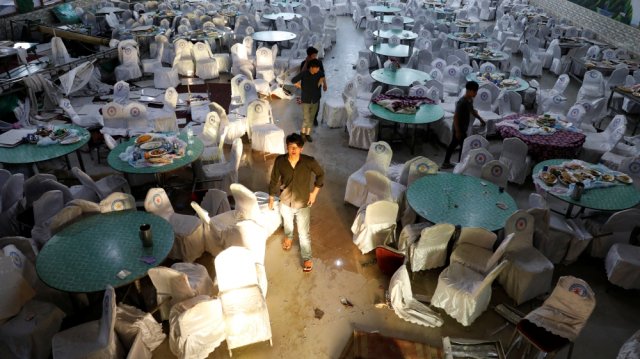 At least 63 people have been killed and several wounded in an explosion targeting a civilian wedding in Afghanistan’s capital, Kabul, officials confirmed on Sunday claiming one of the deadliest attacks in Kabul this year.

The suicide blast took place on Saturday evening in the reception area of the Dubai City wedding hall in Kabul city, in a Shia minority area, packed with people who came to attend a marriage.

The blast occurred near the stage where musicians were and “all the youths, children and all the people who were there were killed,” a witness told the local Press news agency. The incident caused a large number of casualties of women and children, interior ministry spokesman Nasrat Rahimi said on Sunday.

The Islamic State of Iraq and the terrorist ISIS group took responsibility for the attack, the next day.

The attack happened as the Taliban and the United States are trying to negotiate an agreement on the withdrawal of US forces in exchange for a Taliban commitment on security and peace talks with Afghanistan’s US-backed government.

The Taliban denied any involvement, declaring the Saturday’s blast “forbidden and unjustifiable”, but Afghan President Ashraf Ghani said that the group “cannot absolve themselves of blame, for they provide a platform for terrorists”.

In a series of tweets on Sunday, Ghani strongly condemned the “inhumane attack” and asked for an “extraordinary security meeting to review and prevent such security lapses”.

I strongly condemn the inhumane attack on the wedding hall in Kabul last night. My top priority for now is to reach out to the families of victims of this barbaric attack. On behalf of the nation I send my heartfelt condolences to the families of those who were martyred.

Sunni Muslim militant groups, including the Taliban and ISIL, have repeatedly attacked the Shia Hazara community in Afghanistan and border-across Pakistan over the years.

Militants have periodically targetted Afghan weddings, which are easy targets because of frequently less rigorous security.

On July 12, at least six people were killed when a suicide bomber attacked a wedding occasion in the eastern Afghan province of Nangarhar. ISIL, which has a growing presence in the region, claimed the blast.