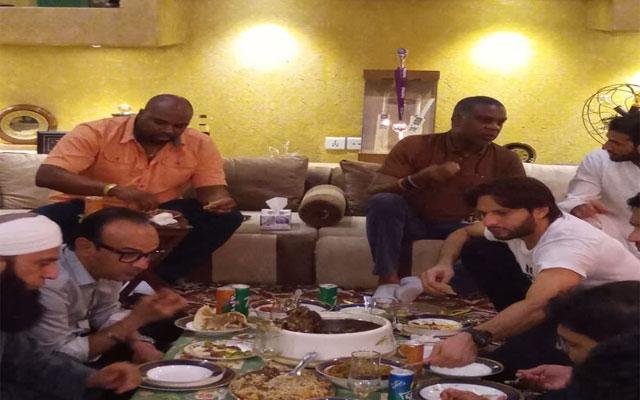 KARACHI: The ex-Pakistani captain Shahid Afridi hosted a dinner party for the West Indian cricket icon Michael Holding at his residence in Karachi on Sunday.

Afridi, who is known for his notable hospitality, served the cricket legend with traditional Pashtun food. The former Michael Holding simply loved it. 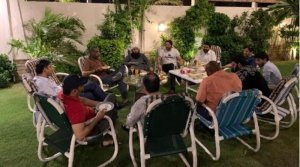 Shahid Afridi also shared the photos of hosting Holding on his Twitter handle. They were joined by another former Pakistan legendary captain Saeed Anwar.

“A real honour to host the legendary Michael Holding for a dinner at home. Thank you, Dr. Kashif, for arranging Michael’s visit to Karachi. Also, thank you to Saeed Anwar for joining us. Great to have some legends visit me,” tweeted Afridi.

A real honour to host the legendary Michael Holding for a dinner at home. Thank you Dr Kashif for arranging Michael's visit to Karachi. Also thank you to Saeed Anwar for joining us. Great to have some legends visit me. pic.twitter.com/Rg2JQnDxXx

Photos of Michael Holding are going viral on social media. Holding also attended a Majlis on Saturday night where he could be seen enjoying Haleem and other desi food items there. 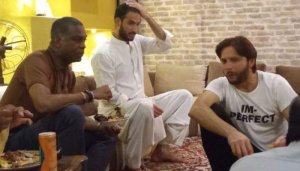 The 65-year-old veteran cricket champion reached in Karachi last week. Since then he has been visiting different places in the metropolis, and treating himself to the spicy Pakistani food.

Earlier, the pacer was spotted with fans in a local shopping mall. Moreover, he was also hosted by former cricketers Sikandar Bakhat, Zaheer Abbas and Javed Miandad.

Michael Holding is currently in Pakistan on a private visit to let the world know that the tell-tale stories of problems in Pakistan are not true and the atmosphere is a lot safer than people could perceive.

“If I had any apprehension or fear of security, I wouldn’t have come to Pakistan. I have no problem here. It is good and encouraging news that the Sri Lankans are here in Pakistan to play international matches,” Holding shared his thought about the ongoing visit in Pakistan.

“It’s great to be back in Pakistan. The food and hospitality have been really good. The weather has improved in the last couple of days here in Karachi and it’s been great to catch-up with Javed Miandad, Zaheer Abbas, and other former Pakistan players,” he added.

Holding is reportedly having a great time in Karachi and enjoying a taste of some traditional food of the country. He is accompanied by Caribbean cricket commentator Barry Wilkinson.

On October 2, the former world cup winner is also expected to attend the third ODI between Pakistan and Sri Lanka at National Stadium in Karachi.