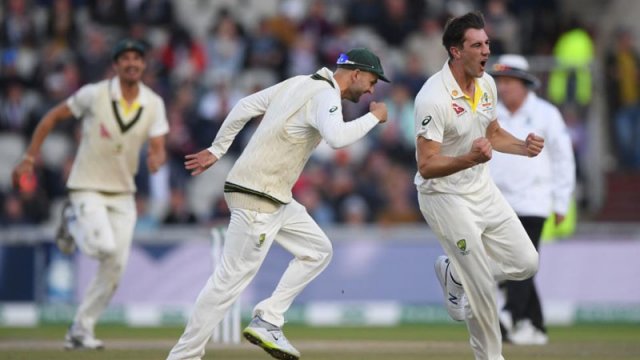 Steve Smith’s ruthless 82 and Pat Cummins’s two wickets in two balls have opened the gates of victory for Australia in the fourth Ashes Test at Old Trafford on Saturday.

England were 18-2 in their second innings at stumps on day four of the fourth Test. They still require 365 runs to get to the target of 383 on Sunday’s last day.

Earlier, the captain of Australian team, Tim Paine, declared at 186-6 after Smith scored a quick-fire 82 — his lowest score this series.

Smith swatted, walloped and waltzed across the crease as he overwhelmed the hosts during a 92-ball blitz, punishing good and bad balls alike. He broke his own record for most consecutive 50-plus scores in the Ashes, which now stands at nine. He got caught out in the deep by Stokes on the delivery of Leach. His 92-balls innings included 11 fours.

Both Rory Burns and Joe Root, the most imposing roadblocks in England’s first innings, got out for ducks by Pat Cummins in the first over of England’s chase.

Jason Roy managed to survive the hat-rick delivery with a solid forward defensive shot. He got through to stumps on eight not out, with Joe Denly unbeaten on 10.