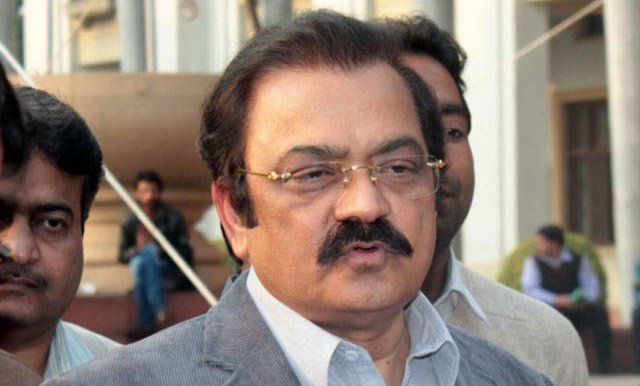 PML-N’s Punjab President Rana Sanaullah Khan has been arrested by the Anti-Narcotics Force for carrying drugs in his car. The incident happened on the motorway near Sukheki area while he was moving towards Lahore from Faisalabad. However, the type and quantity of drugs confiscated from the car have not been disclosed as yet.

While the force commander Brig Khalid Mehmood is closely monitoring the situation, the force has claimed that no action is taken without reason.

Maryam Nawaz took to Twitter to condemn the move and stated as, “What has ANS got to do with Rana Sanaullah? It could not get more absurd. He has been arrested for his bold & courageous stance. Jaali-e-Azam being the small & petty-minded man that he is directly behind his arrest. Make no mistake.”. Shehbaz Sharif also reprehended the action and termed it as “lawlessness and political revenge”. He blamed the government of using state institutions against opposition members to satisfy the political rivalry.

Chairman PPP Bilawal Bhutto Zardari also wrote in favor of the fellow opposition member as, “Arrest of President Punjab PMLN by Anti-Narcotics force is obviously a desperate attempt at political victimization. Sanaullah has been a vociferous critic of PPP in the past & is currently one of the most vocal critics of the regime. Arrests expose govts weakness & desperation.”. Bilawal added that the government is politically victimizing the opposition members and the arrest shows the weakness and desperation of the government.

Former law minister of Punjab was heading towards Lahore for a meeting when the ANF’s Lahore team intercepted and took him under custody. ANF said in a statement that, “A large number of drugs was recovered from Sanaullah’s car,”. A detailed statement will be issued by the force after the completion of the due process.