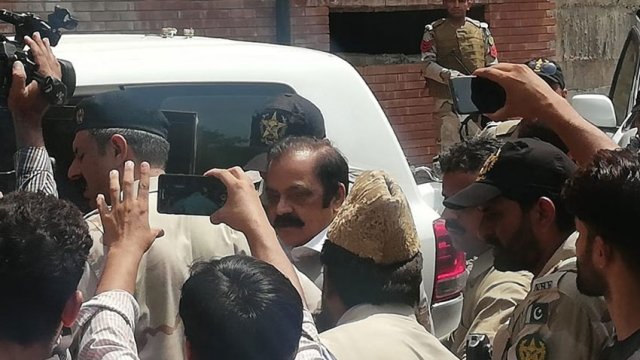 Current MNA and former Law Minister of Punjab is under the rule of law, as the district court in Lahore has sent him to jail on judicial remand for 14 days. He was presented in court by the Anti-Narcotics Force (ANF) along with five other suspects (Akram, Amir, Usman, Sibtain and Omer), where Judicial Magistrate Ahmad Waqas sent all the suspects to jail. The court has further ordered to conduct a medical examination of Sanaullah and to produce him before the court on 16 July.

On his arrival, strict security measures were taken to avoid any chaos and security officials secured the route and court premises as well to counter any adverse situation. However, the party worker gathered and raised slogans to show moral support for Sanaullah. He was arrested yesterday by the ANF near Sukheki area while he was moving towards Lahore from Faisalabad. It is believed that a huge amount of drugs were recovered from his car which may worth up to 150 to 200 million rupees.

The move was brutally criticized by the front line opposition members including Shehbaz Sharif, Maryam Nawaz, Bilawal Bhutto, etc. Brother-in-law of Sanaullah said that “The raiding team intercepted Sana¬ullah’s car at Sukheyki. It took him into custody along with his driver and three guards and probably took him to the ANF Lahore Cantt office,”. Later the arrest, his wife also visited the jail and requested the authorities to allow a meeting of a few minutes and to give him medicines.

Special Assistant to PM on Information and Broadcasting Dr. Firdaus Ashiq Awaz claimed that the ANF is an independent body and the case is not politically motivated. She added that the arrest was made on authentic information and no one in this “Naya Pakistan” is beyond the constitution and law.