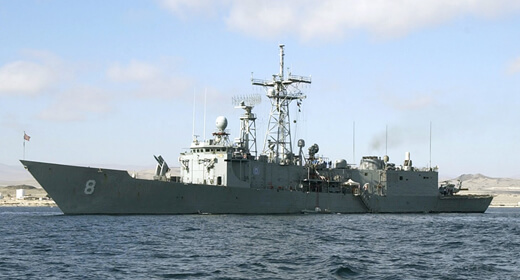 Upon arrival at Jeddah Port, the ship was given a warm welcome.

PNS Alamgir is deployed in the Arabian Sea for regional maritime security patrol.

During the stay at the port, Commanding Officer PNS ALAMGIR called on Southern Naval Area Commander and Deputy Commander 11 Infantry Brigade of Royal Army of Oman and conveyed sincere regards from Admiral Zafar Mahmood Abbasi, Chief of the Naval Staff to the Royal Navy of Oman. 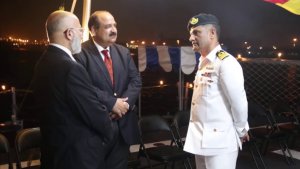 A reception dinner was also hosted onboard during the stay, which was attended by prominent members of Pakistani expatriates and officers and men of the Sultan’s Armed Forces.

Later, the ship was opened for visitors. During this, RNO personnel and members of the Pakistani expatriate community visited the ship. In the last part of the visit, the ship also conducted joint exercises with RNOV AL-RASIKH while on the way to the deployment area.

Pakistan and Oman are tied in eternal bonds of friendship and brotherhood. The visit by PNS ALAMGIR to Oman Naval Base was also in pursuance to the policies of the Government of Pakistan to further enhance friendly ties, and explore new vistas for future collaborative initiatives between the two brotherly countries. Subsequently, the ship resumed its role in RMSP in the North Arabian Sea,” added a press release.