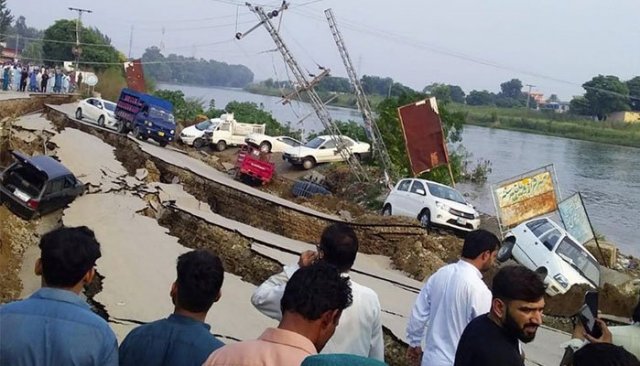 MUZAFFARABAD: The powerful earthquake of 5.8 magnitude jolted different parts of Azad Jammu and Kashmir (AJK) at 4:01 p.m. on Tuesday, claiming at least 30 lives and leaving more than 450 injured.

The quake hit some urban and rural parts of the Azad Jammu and Kashmir (AJK) including Muzaffarabad, Kotli and many other scattered places.

However, according to the data released by the United States Geological Survey (USGS), the epicenter of shallow earthquake was close to the city of Mirpur in the Pakistan-controlled area of the disputed Kashmir region, roughly 20 kilometres north of Jhelum in Punjab.

“The quake was 10 kilometres deep and was felt in most of Punjab province and some parts of Khyber Pakhtunkhwa. The worst hit was Mirpur, Azad Kashmir,” chief meteorologist Muhammad Riaz told AFP.

Map of felt reports received so far following the #earthquake M5.9 in Pakistan 42 min ago pic.twitter.com/DdNiVuv2Dx

The tremors lasted for about 8-10 seconds and were felt strongly as people ran out on to the roads from their houses and offices.

At least 30 people lost their lives and more than 450 people received injuries, said Sardar Gulfraz Khan, Mirpur Deputy Inspector General of Police. 11 deaths have been reported in Jatlan and 9 in Mirpur alone. The casualties were shifted to Divisional Headquarters Hospital Mirpur.

Muhammad Afzal, the head of the NDMA, told that the rescue teams were dispatched by the National Disaster Management Authority (NDMA).

He also confirmed that various buildings including Boyz Hostel in Jatlan collapsed as the outcome of the strong earthquake. 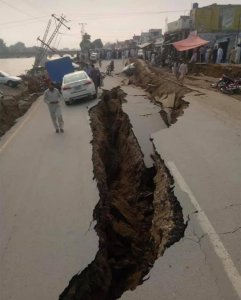 Chief of the Army Staff (COAS) Qamar Javed Bajwa has issued directives to the Pakistan Armed Forces to begin urgent relief efforts in the areas affected by the earthquake.

Moreover, the NDMA says that aftershocks can be expected in the next 24 hours in earthquake-hit areas across Pakistan.