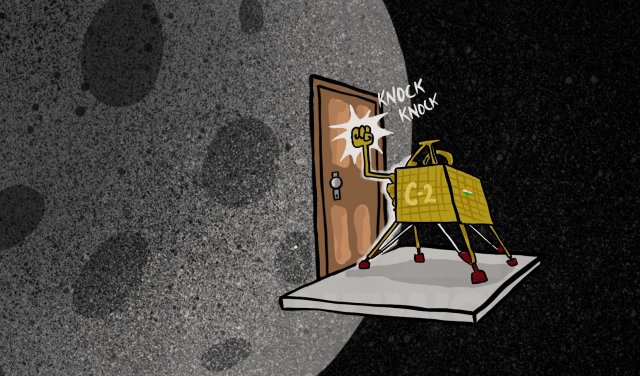 “It must have been a hard landing,” a comical statement by ISRO chairman.

The lunar lander, Vikram from India’s moon mission has been found on the lunar surface, the day after it lost contact with the space station, and efforts are underway to try to establish contact with it, the head of the nation’s space agency said.

The cameras from the moon mission’s orbiter had located the lander, said K. Sivan, the chairman of the Indian Space and Research Organisation (ISRO). “It must have been a hard landing,” He added.

It seems like India didn’t digest the troll it faced from Pakistan and keep pushing itself to enter some kind of Supersoul in its failed space program. “It must have been a hard landing,” obviously it was, and hard enough to bang all their efforts on the lunar ground.

The space agency said it lost contact with the Vikram lunar lander on Saturday as it made its final approach (was trying to make actually) to the moon’s south pole to station a rover to search for the signs of water.

A successful landing would have made ill-fated India just the fourth country to land a vessel on the lunar surface, putting their ego on mars.

The roughly $140m mission, known as Chandrayaan-2, was intended to study permanently shadowed moon craters that are suspected to have water deposits.

A long-haul budget on a space mission to satisfy its inner ego, while people are dying because of poverty, shows the mental illness of poor nation.

Any country capable of developing Nuclear warheads can easily manage to conquer the lunar surface. But its the matter of investment, not technology. Pakistan could have easily done that before.

Those antinational peace-mongers and pseudo-liberals who are chanting about ethics and praising Indian move to reach the space, targetting our technological capabilities for doing nothing (according to them), are requested to do little research about the technological advancement needed for the development of Ababil, Shaheen and Ghori Missiles, capable of carrying both nuclear and conventional warheads.

India is satisfying the same ego that dates back to the Cold war era when the US administration under the leadership of Ronald Reagan conducted space missions to provoke USSR for spending Billions in space programs, making them refrain from investing in Ballistic missile programs. Thus created a divergent.