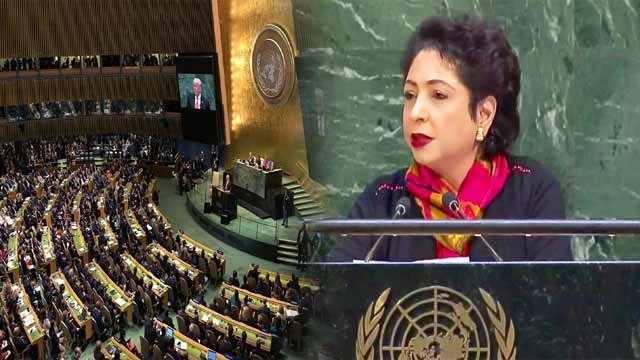 Maleeha Lodhi, Pakistan’s ambassador to the UN, asked the UN Security Council to demand an end to Indian military lockdown of Indian-occupied Kashmir, which has now entered its second month.

“When the Security Council fails to implement its own resolutions, the price is paid, in blood, by generations of innocent people,” she said during a UN General Assembly session on a Security Council report on Friday.

Lodhi took to Twitter to discuss the proceedings. “This travesty must end,” she tweeted.

She mentioned that while some resolutions are enforced, others are ignored and that the Kashmir dispute not only portrays a brutal occupation but is also a reminder to the Security Council’s assurance to Kashmiris of their right to self- determination.

After the illegal move by BJP-led Indian government to abolish the special status of Indian-occupied Kashmir, the forbidding reality of occupation has become serious for the Kashmiri people, she stated, mentioning that the darkness of the on-going curfew and blackout enforced on the poor Kashmiri people shows no sign of ending.


In this regard, the Pakistani representative alerted that unilateral action and immense violations of Security Council resolutions threaten rule-based international treaties, as well as the Council’s legitimacy and credibility.