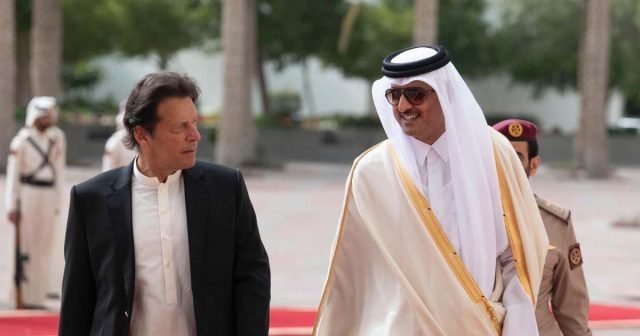 21 gun salute by Pakistan Army was given, and Pakistan Air-force’s star jet JF-17 Thunder also presented a flypast for the foreign dignitary.

PM Khan again took the steering himself for the Emir of Qatar, as he did the same earlier for other honorable state’s guests to drive them to the PM House. On arrival at the house, National anthems of both the countries were played and Emir reviewed the Guard of Honor. Later that, the formal introduction of the federal cabinet was done. As a custom, he also planted a sapling in the lawn.

Emir’s visit has brought many fortunes for the economy of Pakistan as three Memorandum of Understanding (MoUs) were signed after the meeting between the head of states discussing bilateral relationships and cooperation. Details of MoUs are as under:

Earlier his visit, PM Khan said that the Emir is likely to bring an investment of 22 billion USD for multiple sectors in Pakistan. Foreign Minister Qureshi was also very positive about the visit and commented that “This visit would further strengthen our already good relations,”

The honorable guest will be presented with a special vase, made of camel skin on which his own portrait has been painted. The craft has been prepared by a local artist Hanif Khan. PM Khan will present a unique gift to the Emir.